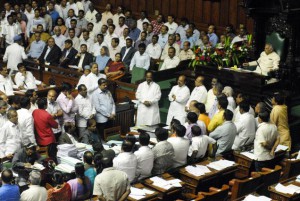 BANGALURU: In the midst of an unrelenting Opposition campaign, the final blow to Chief Minister Siddaramaiah seems to have come when even Congress president Sonia Gandhi refused to back the State government’s stand against a CBI probe into the death of IAS officer D.K. Ravi.
Since he took charge as Chief Minister in 2013, the Congress high command has consistently backed Mr. Siddaramaiah through internal rebellions and has kept a distance from the functioning of the State government.
But in this case “keeping in mind the sentiment of the officer’s family and public opinion Ms. Gandhi advised the State for a CBI probe,” says G. Parameshwara, president, Karnataka Pradesh Congress Committee. Congress spokesperson Rajeev Gowda, MP, agreed and added, “there is nothing that the State government wants to hide,” so why not a CBI probe.
While a section in the party hoped that it could claim that “Ms. Gandhi’s intervention” led to the CBI probe, the public “advice” from the high command was an embarrassment for the Chief Minister, who had to clarify to the media that “they have only advised us and the final decision will be taken by the State government.”
Mr. Siddaramaiah had said that he did not want to give the case to the CBI as it would “affect the morale of the State police force.” He was also worried that the BJP could “misuse” details from the investigation, according to party leaders.
Meanwhile, the JD(S) and the BJP ensured that they obtained the maximum political mileage from the protests on the issue.The officer’s popularity and circumstances of his death led to a spontaneous reaction from the people, especially in Kolar district where he served and Tumakuru district where he hailed from. The fact that he hailed from the Vokkaliga caste, which is the backbone of the JD(S), made it a major issue for the party and the former Chief Minister H.D. Kumaraswamy was the first to claim it was “not a suicide.”
The BJP had to ensure that the JD(S) did not take centre stage. It raised the issue in Parliament and held street protests in Bengaluru. The two parties joined ranks and stalled proceedings in the legislature. Ultimately, Mr. Siddaramaiah seems to have not just lost to the Opposition but was also left without his party’s backing.