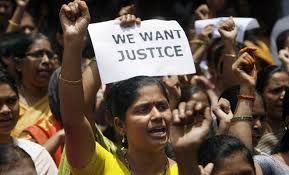 HYDERABAD: Rayalaseema and coastal Andhra regions of Andhra Pradesh are observing a complete shutdown for the second consecutive day Friday to protest the tabling of the Telangana bill in parliament.
The shutdown called by the YSR Congress party and another group fighting for united Andhra Pradesh evoked total response in all 13 districts of Seemandhra, as the two regions are togetehr called
Buses of state-owned Andhra Pradesh State Road Transport Corporation (APSRTC) remained off the roads while shops, business establishments and educational institutions were closed
Activists of the YSR Congress and Andhra Pradesh Non-Gazetted Officers (APNGOs) Association took to streets since early Friday to protest the central government’s action of tabling the bill in parliament despite a strong opposition from MPs belonging to Seemandhra.
The protesters, raising slogans against the UPA government and Congress president Sonia Gandhi, staged road blockades at several places. The bill to carve out separate Telangana state was Thursday tabled in the Lok Sabha amid unprecedented ruckus. L. Rajagopal, a Lok Sabha member from Seemandhra, used pepper spray and a scuffle also broke out between MPs of the two regions.
The Lok Sabha speaker suspended 16 MPs, including YSR Congress president Y.S. Jaganmohan Reddy, for their involvement in the unruly, noisy incidents.Jagan, as the MP from Kadapa is popularly known, called for the shutdown to protest what he calls the mockery of democracy.
‘Samaikyandhra parirakshana vedika’ or ‘Save United Andhra’ front also has called for shutdown in Seemandhra to condemn what it alleged was an attack on state MPs by the MPs from other states.The strike by government employees in Seemandhra continued for the ninth day Friday to protest the proposed bifurcation of the state
Meanwhile, central minister J.D. Seelam had to face the ire of the protestors in Krishna district. The minister, who was going to West Godavari district, was stopped by the protestors near Hanuman Junction. A protestor threw broom on the minister’s car. Police used mild force to disperse the mob to provide safe passage to the convoy.