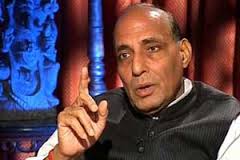 NEW DELHI : As a beleaguered Congress struggles to push through Parliament the controversial plan to split Andhra Pradesh to carve out a Telangana state, the main opposition party, the BJP, is not offering to help.
The party, which had earlier said that it was likely to support the Telangana bill, made it clear today that the government must ensure order is restored in Parliament and the proposal is debated first. It also challenged the government’s assertion that the bill was tabled amid bedlam in the Lok Sabha today.
Parliament has recorded the Bill as being introduced this morning, even lawmakers supporting a new state of Telangana clashed with others who are opposed to it. But Leader of Opposition in the Lok Sabha Sushma Swaraj said, “How is the government claiming that it was introduced? The chaos began before the Speaker could arrive. The bill has not been introduced.” She said her party has spoken to the Speaker on this.
Senior BJP leader LK Advani said he had shared his party’s concerns with the PM. “I have been in the Parliament since 1970 but never witnessed such a scene before…It was disgraceful for Parliament… All this while they are thinking in terms of going ahead with the controversial bill of theirs. They should not do anything except holding vote on account in this chaotic situation,” he said.
The veteran BJP leader was referring to the ugly scenes that Parliament has witnessed. A Congress MP used pepper spray in the well of the House; another from the TDP yanked the mic from the Secretary General’s seat; 16 parliamentarians have been suspended for the unprecedented violence inside the Lok Sabha.
Party chief Rajnath Singh was non-committal on whether the suspension would make the BJP discuss and pass the bill. “We will not support the Telangana bill if the House is not in order,” Mr Singh told NDTV soon after the Lok Sabha was adjourned because of the bedlam. “The Congress’s mismanagement is to be blamed for the shame in Parliament,” he added.
The government has only four working days left of the last session of Parliament before general elections due by May. It is determined to push the Telangana plan through Parliament so that it can profit with voters in the region in the elections. Leaders from the non-Telangana regions are vehemently opposed to the plan to downsize Andhra Pradesh.