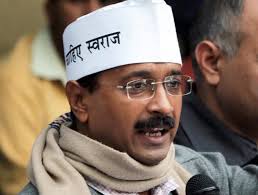 New Delhi :Arvind Kejriwal’s Aam Aadmi Party (AAP) today asked the people of Delhi to decide whether they should form a minority government with the support of the Congress or the BJP.The year-old party, struggling with the key political decision just after its spectacular debut in the Delhi election, threw it open to an opinion poll, insisting that it was not running from its responsibility.
25 lakh copies of AAP’s letter inviting people’s views will be distributed and replies will be taken till Sunday, Mr Kejriwal said.”How can we take the support of the Congress, which looted the country? Why is the BJP, which has cobbled governments in other states, shying away from its responsibility in Delhi?” are some of the questions for citizens.
The AAP, which won 28 seats and fell eight short of the majority mark in the assembly polls, had last week written to both the BJP and the Congress seeking their views on what it called 18 issues key to Delhi, so that it could decide on taking their support.”The BJP did not even bother to reply, and the Congress said 16 points were executive decisions, and it would support us on the remaining two,” Mr Kejriwal said, mocking both parties.

The BJP, which fell five short of a majority with 31 seats, and the AAP have both refused to stake claim to power saying they do not have the mandate to rule. Lieutenant Governor Najeeb Jung has reportedly said in a report to the Centre that recommending president’s rule is the best way out of the impasse. According to NDTV…The term of the current assembly ends tomorrow.

AAP leaders view the Congress offer for unconditional support with suspicion. “We are told the Congress will behave till the national election, so we have six months to rule until they bring down the government,” Mr Kejriwal said.
Leaders of the BJP and the Congress have accused the AAP of trying to avoid forming a government as they know they can’t fulfill their “unrealistic” poll promises.