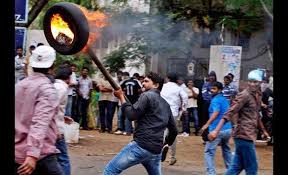 HYDERABAD : Normal life came to a grinding halt in Rayalaseema and coastal Andhra regions of Andhra Pradesh due to the shutdown called to protest possible tabling of Telangana bill in parliament Thursday.
Buses of state-owned Andhra Pradesh State Road Transport Corporation (APSRTC) went off the roads in all 13 districts of Seemandhra, as the two regions are collectively called.
Shops, business establishments, petrol bunks and educational institutions remained closed in response to the shutdown call given by Andhra Pradesh Non-Gazetted Officers (APNGOs) Association, which represents the government employees in Seemandhra.
YSR Congress party and Congress and Telugu Desam Party (TDP) leaders in Seemandhra have announced support to the shutdown.The government employees, who are on strike for last one week opposing the proposed bifurcation of the state, and activists of various parties took to streets since early Thursday. They laid siege to APSRTC depots to stop buses from coming out.
Raising slogans in support of united Andhra Pradesh, the protesters also staged road blockades on national and state highways, affecting the movement of vehicles.
Shutdown hit life in Visakhapatnam, Vijayawada, Guntur, Ongole, Tirupati, Kurnool, Anantapur, Kadapa and other towns in Seemandhra.