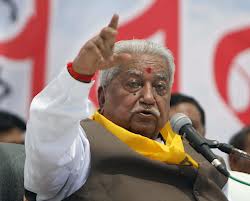 NEW DELHI : In an another boost for Bharatiya Janata Party, Gujarat Parivartan Party leader and former chief minister Keshubhai Patel on Wednesday announced that he will quit active politics and wished that his party should merge with the BJP. Once known to be an arch rival of Modi, Keshubhai had floated GPP against Modi in the year 2012.
“I have yet not decided to join any political party but I feel that the GPP be merged in a national party other than the Congress,” Patel said. “”I am going to resign as an MLA because of my growing age and ill health and will tender my resignation from the post of MLA to the Assembly Speaker when the session begins,” the six-time legislator said.
His party had faired poorly in the 2012 assembly elections as only two of its candidates won out of the total 182 seats. Last month, Patel had stepped down from the position of GPP president after his son Bharat joined BJP.
Meanwhile, many GPP leaders have reservation over the party collaborating with BJP. “If a party loses, it doesn’t mean it can go with another party. Many of the workers including me feel GPP should not merge with the BJP,” said Suresh Mehta.
The BJP has welcomed the move saying both the parties are of same ideologies. “I am aware of the Keshubhai announcement but so far GPP has not approached us. We are open to the merger as GPP and BJP are of same ideologies,” said Jay Narayan Vyas.
The announcement to quit active politics by Patel, who became the chief minister of Gujarat for the first time in 1995 from BJP, might be the end of his five-and-half decade old political career. He was unceremoniously removed from the CM’s post in 2001 by the BJP leadership and Modi was installed in his place. He had been nursing a grudge against BJP leadership since 2001 which culminated in his forming a political party.
Patel, who started his political career as a worker for Jansangh in 1960, was also a founder member of BJP and became a pillar of the party in its rise in Gujarat.