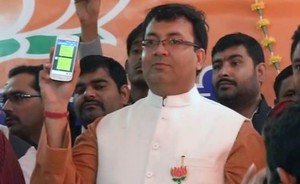 AMETHI :  The political battle in Amethi, the high profile constituency of Congress Vice-President Rahul Gandhi, got a new entrant today.
Congress Rajya Sabha member and former Amethi royal Sanjay Singh’s estranged son, Anant Vikram, joined the BJP today in the presence of state BJP President Laxmikant Bajpai.
“With my entry, the BJP will be strengthened in Amethi. If given a ticket, I would fight elections,” said Mr Vikram.
Mr Vikram is Sanjay Singh’s son from his first wife Garima. Mr Vikram’s political ambitions first surfaced during the last showdown between the father and son in September when supporters of Mr Vikram clashed with the police to protest the arrival of Sanjay Singh and his current wife Ameeta at the royal palace in Amethi. Mr Vikram had told Reporters then that he would like to serve the people like his forefathers. Mr Singh is a current Rajya Sabha MP from Assam.