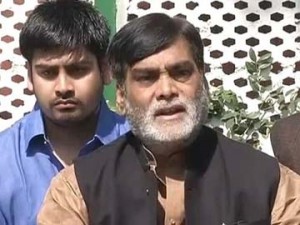 NEW DELHI :  Angry over being denied a Lok Sabha ticket from Pataliputra in Bihar, Rashtriya Janata Dal MP Ram Kripal Yadav today resigned from all party posts, including that of general secretary. Candidature of that constituency went to Misa Bharti, daughter of RJD chief Lalu Prasad, who Mr Yadav has been a close aide for yearI have resigned from all party posts but continue to be its member as of now,” said Mr Yadav, adding that “all options were open.”This was in response to questions on whether he would join the Bharatiya Janata Party (BJP) which has been a subject of intense speculation ever since the Rajya Sabha MP declared that he would quit the party.
Mr Yadav has made no attempt to hide his anger after Mr Prasad announced that his first-born would contest next month’s national election from Pataliputra in Bihar.The 56-year-old, in fact, dubbed as plain “emotional blackmail” a visit by Ms Bharti to his residence yesterday, which was the young woman’s first attempt at political peacekeeping
.He alleged that the RJD, which was born to uphold the principles of social justice, now appeared to be interested solely in “family justice”.Misa – who gets her unusual name from the Maintenance of Internal Security Act (MISA), the law under which her father was jailed during the 1975-77 Emergency – is among 23 candidates named by the RJD.
The 37-year-old is the oldest of nine siblings. Lalu Prasad’s sons, Tej Pratap Yadav and Tejashwi, are active in party politics but are both too young to contest elections. In 2009, Ram Kirpal Yadav had given up Patliputra to allow Lalu Prasad to contest from there. The RJD chief had contested from both Chhapra and Patliputra; he had defeated the BJP’s Rajiv Pratap Rudy in Chhapra, but lost to Ranjan Prasad Yadav of the Janata Dal (United) in Patliputra.