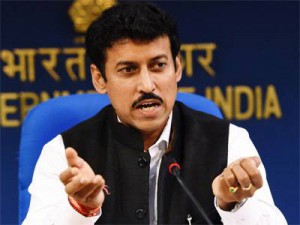 NEW DELHI : Union minister Rajyavardhan Singh Rathore today posted a series of tweets denying he had said on Friday that women journalists are more suited for off-field roles like news analysis instead of field reporting.
“Wrong interpretation. My wife is an ex-soldier,” Mr Rathore, 45, said in one tweet. In others, he protested, “False, false, false. Totally false, Shame.”The Olympic medalist and former army officer reportedly made the comments at an interaction on Thursday at the Indian Women’s Press Corps.
“When it comes to print, is mostly about analysis of or the implication of the news. And therein I think your role could be far better utilised without actually going out in the field.
Not to say that you should not go out or there is a restriction on going out …. what I am saying is, in the sense of safety and security, and of course your working hours, and conditions which we all know has a degree of difficulty attached because as a mother, sister, the roles you all play, there are other responsibilities as well…,
” Mr Rathore, the junior minister for Information and Broadcasting, said.
On social media, Mr Rathore was criticized in comments like this: “Amazing India’s MOS for I&B has such views on women reporters.”  In one of his multiple tweets this morning, Mr Rathore said, “I’ve the highest respect for women personally & professionally. My 6 month pregnant soldier wife was on battlefield after Parl attack. (sic)”