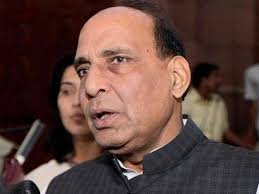 NEW DELHI : Union Home Minister Rajnath Singh today met Mohan Bhagwat, the head of the Rashtriya Swayamsevak Sangh or RSS, reportedly to discuss who will take over from him as BJP chief.Mr Singh, 62, drove to the RSS’ Delhi office in Jhandewalan to meet Mr Bhagwat and his other colleagues. The RSS is the ideological mentor of the BJP and plays an important role in the party’s decision making.
The BJP does not allow party leaders to hold dual charge. So Mr Singh, who took oath as a minister in the Narendra Modi government at the Centre on Monday, will have to relinquish the post of BJP chief. He was picked for that role by the RSS last year.
BJP general secretary J P Nadda is seen as a frontrunner in the race to become the next BJP chief.