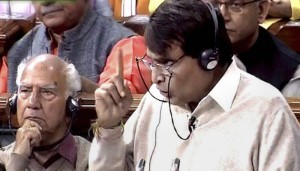 NEW DELHI:Union Railway Minister Suresh Prabhu made no changes either in passenger fares or freight rates while presenting his second Rail Budget in Parliament on Thursday.
Prabhu announced introduction of three new super-fast trains and creation of dedicated north-south, east-west and east coast freight corridors by 2019.
No hike in passenger and freight rates, over 65,000 additional berths, wi-fi services at 100 stations, improvement in passenger amenities including cleanliness, make rail a safer means of travel specially for women are some of the highlights of this year’s Railway Budget 2016-17.
The other highlights include that Railway will generate 9 crore man-days employment by 2017-18 and 14 crore man-days by 2018-19. Mr Prabhu said it will bring all major stations of the country under CCTV surveillance in a phased manner, e-ticketing facility to foreign debit and credit cards for foreign tourists and NRIs and making Railways financially self sustainable.
Presenting his second rail budget in Parliament today, Railway Minister Suresh Prabhu said ‘Reorganise, Restructure and Rejuvenate’ are the three key mantras for his ministry. Proposing a plan size of one lakh twenty one thousand crore rupees in 2016-17, Mr Prabhu said by 2020, long felt desires of the common man are to be fulfilled.
They are reserved accommodation on trains availability on demand, time tabled freight trains and high end technology to improve safety record among others.
Saying cooperation, collaboration, creativity and communication are the hallmarks of Railways decision-making, Mr Prabhu said Antyodaya Express fully unreserved superfast train service for the common man to be operated on dense routes.He said two to four Deen Dayalu coaches in some long distance trains for unreserved travel to enhance carrying capacity.
In another milestone for the Railways, the minister said Tejas trains will operate at speeds of 130 kilometre and above.He said time-tabled freight container, parcel and special commodity trains on a pilot basis and containeer sector would be opened to all traffic barring coal.
The minister proposed to develop Rail side logistics parks and warehousing in PPP mode. Mr Prabhu said 10 good sheds will be developed in 2016-17.
Annoucning amdist thumping of desks by the treasury benches , Mr Prabhu said country’s first rail auto hub in Chennai will be inaugurated soon. He also announced to encourage development of cold storage facilities on vacant land near freight terminals.

Announcing setting up a Rail university at Vadodara, Mr Prabhu also said beautification on stations at pilgrimage centres including Ajmer, Dwarka, Gaya, Puri, Varanasi and Parasnath will be done on priority.
In addition to this, Mr Prabhu said to spread awareness about our national animal, the tiger, complete packages would be provided by railways to wild life circuits.The minister announced introduction of overnight double decker trains on busiest routes, which has the potential to increase carrying capacity by almost 40 per cent.

He said in the next year, 2,800 kilometres Broad Gauge lines will be commissioned. Giving emphasis on better connectivity to North Eastern States, the minister said Mizoram and Manipur are set to come on the Broad Gauge map of the country soon with commissioning of the kathakal-Bhairabi and Arunachal- Jiribam Gauge conversion projects.
He said the decongestion work on the Jalandhar-Jammu line is going on in full swing. In the line of Prime Minister’s emphasis on Make in India, Mr Prabhu said Railways will be able to finalise the bids for setting up two loco factories at a worth of 40,000 crore rupees.

The minister said world’s first Bio Vacuum toilet was developed by the Railways and is being used in Dibrugarh Rajdhani Express.The minister said rail travel will be more comfortable with installation of 2,500 water vending machines, introduction of 1,780 automatic ticket vending machines and enhancing capacity of e-ticketing system from 2,000 tickets per minute to 7,200 tickets per minute.

He proposed to take up North-South freight corridors connecting Delhi to Chennai, East-West connecting Kharagpur to Mumbai and East Coast freight corridors from Kharagpur to Vijayawada through innovative financing model including public private partnership (PPP). He said during 2016-17, ports of Nargol and Hazira will be connected by rail.
Highlighting social initiatives undertaken by his ministry, Mr Prabhu said there will be a tie up with Health ministry to introduce AYUSH systems in 5 railway hospitals. He said gang men will be intimated about approaching trains with a device called Rakshak.

Announcing several new measures by his ministry, Mr Prabhu said a sum of Rs 50 crore has been set aside for providing innovation grants to employees, startups and small businesses. The minister proposed to reorganise the Railway Board along business lines suitably empowering Railway board chairman.
To enable fair pricing of services, promote competition and protect customer interests, Mr Prabhu said a draft bill to set up Rail Development Authority, will be ready after holding extensive consultations with stakeholder.
Mr Prabhu said his ministry is making all out efforts to translate Prime Minister’s vision into reality with the core objective to improve the quality of customer experience, become an engine of employment generation, economic growth at the national level and convert India’s largest institution into a template for transformation.

Prime Minister Narendra Modi has said the Rail budget will enhance in rebuilding the nation. Congratulating Railway Minister Suresh Prabhu and the entire team behind the Rail Budget, Mr Modi said this is futuristic budget.
Starting of Antyodaya express and Dindayal Express reflects government’s commitment towards poor. He said railway Minister has taken significant steps towards more rail connectivity in North-eastern states.
Meanwhile,the rail budget has been welcomed by cross section of people. While students feel that free wi-fi facility at stations will help them get real time running status of trains, senior citizens have lauded hike in quota in reserved compartments. CCTV in train coaches will make journey for passengers, particularly for women, more safe.