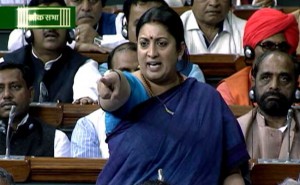 NEW DELHI: Union Education Minister Smriti Irani’s assertions on Hyderabad student Rohith Vemula during her fiery speech in Parliament on Wednesday have been challenged by the doctor who examined him and also students.
Ms Irani suggested that there was a chance Rohith Vemula, the research scholar found hanging at the Hyderabad Central University on January 17, could have been revived.
The police action against JNU students and the conditions leading to Dalit scholar Rohith Vemula’s suicide are not isolated incidents, but part of a larger project to change India into a “Hindu Rashtra”, CPI (M) general secretary Sitaram Yechury said on Thursday.

He was initiating a debate in the Rajya Sabha on the situation arising in the central institutions of higher learning, including the JNU and the Hyderabad University.
“This is how politics was played on this child and his dead body. Nobody allowed a doctor near him. The police has reported… Not one attempt was made to revive this child. Not one attempt was made to take him to a doctor. Instead his body was used as a political tool.
Hidden. No police was allowed till 6.30 the next morning. Not me, but the Telangana police is saying this,” the minister said to cries of “shame” from the government benches.The doctor who declared Rohith dead has disputed the minister’s comments.
Dr Rajasree Malpath, Chief Medical Officer at the Hyderabad Central University, says she was called in moments after Rohith was found hanging from a fan. She told. that when she came to examine Rohith, he had been dead for at least two hours.
“Around 7.30 pm I got a call from the hostel. I reached within 4 minutes. The body was already put on the cot. I examined for pulse and BP, despite knowing he is probably dead. There was no pulse or BP. His body was cold, stiff and rigid. His tongue was protruding and rigor mortis had set in,” the doctor told .
A video of the room where Rohith’s body was kept that day, shared by his friends, shows policemen next to the body, which contradicts the minister’s claim that the police were not allowed near the body till the next morning.
The police did say that the body was not moved until 6.30 the next morning, because at least 700 students were around and the mood was volatile. “Many had petrol and kerosene and had refused to let us take away the body,” a police officer told .
Rohith Vemula’s suicide has triggered an acrimonious political debate around alleged caste discrimination in universities.

The student was found dead days after he was banned from the hostel and other common areas on campus for allegedly attacking an activist of the BJP-linked ABVP. His supporters and opposition parties allege that Rohith, a Dalit, was ostracised because he was a dalit.
Ms Irani was yesterday responding to opposition allegations that she had forced the university to punish Rohith with multiple letters.