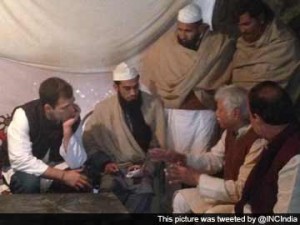 Muzaffarnagar: Congress Vice President Rahul Gandhi today met Muzaffarnagar riot victims at relief camps set up by the government and urged them to return home, saying “those engineering communal riots” want them to remain at the camps as “such a situation benefits them.”

“Those who engineer communal riots want that you should not go back. This benefits them. They want to keep you away from your villages. I know it is difficult and there is also fear there but we have to think beyond. This will not be good in the long run.

“The message goes out that you will not go back to your villages. Those fanning communal riots precisely want this to happen,” Mr Gandhi told riot victims and asked them to let him know what he could do help them return to their homes.

The Congress No 2, who was accompanied by Minister of State for Home RPN Singh and AICC General Secretary Madhusudan Mistry, began his visit by meeting victims at the Malakpur relief camp in Shamli district. Later, he also held interactions at nearby Khurgan and Barnavi camps. He is likely to visit several more camps.

During the interaction, some victims told him that they do not want to go back to their homes as they fear they would be attacked again.

Communal riots tore through the western Uttar Pradesh town of Muzaffarnagar in September this year, leaving nearly 60 people dead and close to 40,000 homeless. The violence was triggered when a young Muslim man was killed allegedly by Hindus for reportedly sexually harassing a woman.