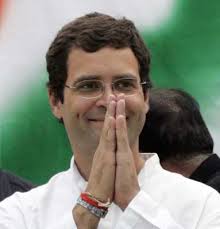 The chorus to declare Rahul Gandhi as Congress’ prime ministerial candidate is growing louder, even at the party’s official press briefings. “We would wish that Rahul Gandhi is projected as the Prime Minister. Right now, there’s a consensus in the party,” said Congress MP Priya Dutt in response to questions on whether the party had decided to name Mr Gandhi as its PM candidate.

Today’s announcement by the Congress of a day-long national session of the party in Delhi on January 17 has further triggered that expectation. At that session, the party will take stock of and strategise for the big test in 2014.
Congress leaders, on record, though say that appointing the PM nominee is an issue that will be decoded by the Congress’ top leadership. Report, NDTV.

Last week, Congress president and Mr Gandhi’s mother, Sonia Gandhi, had indicated that a PM candidate will be announced soon. “People need not worry. At an opportune time, the name of the prime ministerial candidate, his name, will be announced,” she had said, soon after the results of the Delhi elections that completed the party’s humiliating 4-0 drubbing in assembly elections.

But irrespective of that announcement, the party is already repositioning Mr Gandhi’s public image.
From promising affirmative action following electoral losses at a rare press conference with his mother to talking about personal freedom in the context of gay sex to urging parties for the passage of the vexed Lokpal Bill, the Congress No. 2 has been making all the right noises.