RAE BARELI: Chauffeured by her son Rahul Gandhi, Congress president Sonia Gandhi today took out a roadshow in Raebareli, the constituency in Uttar Pradesh that has sent her to the Lok Sabha since 2004. She had come to file her nomination for the general election.Rahul, 43, was in the driver’s seat all the way to the district collectorate where his mother filed her papers. The white SUV weaved its way through the dusty town making several stops, allowing Congress workers and others to greet and garland Sonia Gandhi. 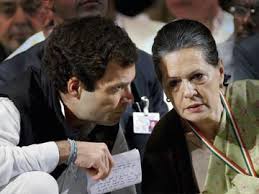 At every stop, security personnel diligently wiped heaps of flower petals off the windscreen.Raebareli was the constituency of former Prime Minister and Sonia’s mother-in-law Indira Gandhi and the Congress expects a walkover this time, too.Mrs Gandhi will participate in a religious ceremony at the Congress office, which has been a Gandhi family tradition for years. “There will be a havan. Indira Gandhi used to come here and pray,” said a party worker of the constituency which has been with the family for long.
After filing her nomination at the district collectorate, Mrs Gandhi will visit Takia village, the birthplace of Ali Miyan, who was the head of the Muslim Personal Law Board.Indira Gandhi was elected from Raebareli in the 1960s and also in 1980. Her husband Feroze Gandhi held the seat in the 1950s. Sonia Gandhi contested her first parliamentary election in 1999 from Amethi. Five years later, she shifted to Raebareli, vacating Amethi for son Rahul’s electoral debut.
Her daughter Priyanka Gandhi manages her mother’s campaign in Raebareli.
The BJP had earlier this week reportedly evaluated yoga guru Baba Ramdev’s suggestion that it field senior leader Uma Bharti against Mrs Gandhi, before announcing that a Supreme Court lawyer, Ajay Aggarwal, would be the party’s candidate in Raebareli.