VARANASI: Pakistan would never dare to behead any Indian soldier and no Chinese chopper would ever “land” in Arunachal Pradesh if Narendra Modi is elected prime minister, BJP leader Amit Shah said on Tuesday.“Pakistan would not dare to chop off head of any soldier like Hemraj on Indian borders if Modi comes to power,” he said after inaugurating Modi’s election office in Sigra locality. 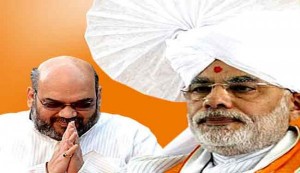 “Pakistan would be on the right path. Even army would not be needed for this. Only if Modi goes and sits at that place, it would be sufficient to put them in their right place,” he said, adding, “If Modi becomes PM, then even China’s chopper would never land in Arunachal Pradesh.”He said the entire country wants change and to get rid of rising prices, corruption, scams. “So they prefer Modi as he is an experienced politician with experience of 12 years of good governance of Gujarat government.”
“If Modi and BJP come to power then people would get 24-hour electricity supply and development would take place like Gujarat. Women would get full protection and 108 ambulances would reach each villages,” he said.
Shah said people in UP vote for SP and BSP to oust Congress but when these parties reach Delhi they both lend support to Congress and become a “life saver” for it.Congress leader Daya Shanker Mishra, who contested last assembly election from Varanasi south seat, joined BJP in Shah’s presence.