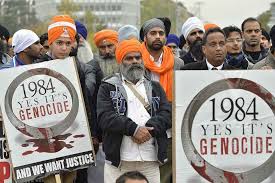 NEW DELHI : 300 protestors carrying black flags and shouting slogans waved black flags and climbed on top of barricades outside the Congress party office in Delhi before they were bussed away by the police.
The demonstration was triggered by Rahul Gandhi’s recent comments on the 1984 riots in the capital in which hundreds of Sikhs were killed in retaliation for the assassination of Indira Gandhi, his grandmother and then Prime Minister.
Mr Gandhi, Congress Vice-Presidnet, ceded this week that “some Congressmen were probably involved” in the riots that ripped through the city after Mrs Gandhi, 67, was shot dead by her Sikh bodyguards. However, he insisted that the Congress government at the time did its best to check the violence.
“The CBI should ask Mr Gandhi which  people he was talking about. He should be made to take names,” said one protestor today.
Almost three decades later, senior Congress leaders like Sajjan Kumar and Jagdish Tytler are being tried for allegedly inciting mobs to attack Sikhs in Delhi. The delay in the legal proceedings has been criticized by Sikh leaders, the families of those who died in the violence, and the opposition.