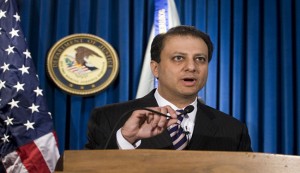 NEW YORK : A US judge here has granted Manhattan’s top prosecutor Preet Bharara time till January 31 to file his opposition to the motion submitted by Indian diplomat Devyani Khobragade seeking dismissal of the indictment against her on visa fraud charges.
Khobragade’s lawyer Daniel Arshack had on January 14 filed a 13-page motion in US District Court on 39-year-old diplomat’s behalf seeking dismissal of the indictment, termination of conditions of her bail and of any “open” arrest warrants or requests for her extradition over the charges.
India-born Bharara wrote to US District Judge Shira Scheindlin yesterday seeking January 31 as the deadline to file the government’s opposition brief and permission that the response be of up to 25 pages in length. Arshack said that the prosecution should be given only 14 days time till January 28 to file its response to his motion.
Arguing that “a prompt resolution” of the case is “essential,” Arshack said he does not agree with the prosecution seeking three more days till January 31 to file their response. ”The issues raised by this motion continue to seriously roil the relations between India and the United States and have a very real impact on the sureties who signed the bond in this case. Therefore we do request the shorter dates suggested herein,” Arshack said in his letter to Scheindlin.

Bharara said that the additional time and increased length are “necessary to thoroughly address the complex legal issues and extensive relevant facts raised by the defendant’s motion”.

Arshack is seeking a court order to dismiss the indictment and proceeding against the Indian diplomat, exonerate any bail or bond previously posted on her behalf and termination of any “open arrest warrants” against Khobragade as “they too are nullities since the instant proceeding is subject to dismissal.”

He said in the motion that because of Khobragade’s diplomatic status the Court did not have personal jurisdiction over her at the time of her December 12 arrest and indictment, but it still has subject matter jurisdiction to rule over her motion to dismiss the case.

In the order, Scheindlin granted Bharara’s request saying that the government’s brief in opposition to Khobragade’s motion to dismiss the indictment shall be filed no later than January 31 and that it may be up to 25 pages in length.

Scheindlin further ordered that Khobragade’s reply to the government’s opposition is due on February 7.