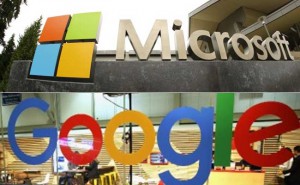 Peace broke out between Microsoft Corp. and Google just two days after European Union antitrust watchdogs sent the search-engine company another statement of objections partly triggered by Microsoft-backed lobbying.
Microsoft and Alphabet Inc.’s Google, two arch rivals in the U.S. technology world for more than a decade, reached a global agreement that they will stop fighting.
“Our companies compete vigorously, but we want to do so on the merits of our products, not in legal proceedings,” Google said Friday in a statement. “As a result, following our patent agreement, we’ve now agreed to withdraw regulatory complaints against one another.”

The acrimonious relationship had already started to thaw, with the duo resolving their long-running patent feud and Microsoft CEO Satya Nadella congratulating Sundar Pichai when he was named CEO of Google. The businesses are working together on Google’s Angular JavaScript development framework, which is now making use of Microsoft’s Typescript programming language and the two companies have sent emissaries to speak about it at one another’s conferences.
The clash was most pronounced in Brussels, where Microsoft urged EU regulators to dish out similar treatment to its rival after being on the receiving end of vast antitrust fines.
Microsoft was once the most active and powerful forces in lobbying the EU to investigate Google’s search practices. It helped to fund ICOMP, an industry group that aided many of smaller companies complaining about Google.
Microsoft was among the first to file antitrust complaints against Google that ultimately led to this week’s statement of objections concerning its Android mobile-operating system. Microsoft’s finger prints were also on last year’s EU charge sheet over Google’s comparison-shopping service.
Ciao, an advertising business then owned by Microsoft, filed one of the first antitrust complaints in Europe to Germany’s Bundeskartellamt.The Brussels-based European Commission took that over in 2010 before it launched its own sweeping probe into allegations that Google might hamper rivals and favor its own services above others in search results.
But it was also in Brussels that signs began to emerge of an end to the enmity. A senior executive told reporters at a cocktail earlier this year that the two companies were now friends. Microsoft also dropped out of ICOMP and another anti-Google group, FairSearch.

Cementing the new relationship, Microsoft said Friday it had agreed to “withdraw its regulatory complaints against Google, reflecting our changing legal priorities” and that it will “continue to focus on competing vigorously for business and for customers.”