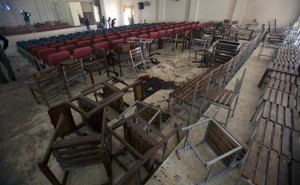 PESHAWAR: Pakistani children and their parents returned Monday to the school where Taliban gunmen killed 150 of their classmates and teachers, their green school blazers, Superman lunchboxes and hands clutched tightly to their parents a symbol of perseverance despite the horrors they had endured.
Pakistan has been reeling from the Dec. 16 terrorist attack in Peshawar – one of the worst the country has experienced. The violence carried out by seven Taliban militants has put a spotlight on whether the country can end the stubborn insurgency that kills and maims thousands every year. The violence also horrified parents across the nation and prompted officials to implement tighter security at schools.
For parents like Abid Ali Shah, getting ready for school Monday morning was horrifically painful. Shah’s wife was a teacher at the school and was killed in the violence. Both of his sons attended the school. The youngest was shot in the head but survived after the militants thought he was dead. Monday morning they were late as they struggled with preparations previously done by Shah’s wife.
“A hollowness in my life is getting greater. I am missing my wife,” Shah said.
His older son, Sitwat Ali Shah, said he had managed to control his emotions. It wasn’t until he saw his brother break down in tears that he did as well.A ceremony was expected to be held at the school, but classes were not expected to be held until later this week.
Security was tight, part of a countrywide effort to boost safety measures at schools in the wake of the attack. Media and vehicles were kept hundreds of meters (yards) away from the school. The chief of Pakistan’s army, Gen. Raheel Sharif, was on hand inside the school to greet students, a military spokesman said on Twitter.
For many, attending school Monday morning was an act of defiance and proof that they would not be cowed in the face of Taliban threats to attack again.
Andleeb Aftab, a teacher at the Army Public School, lost her 10th grade son, Huzaifa, in the attack. She arrived Monday wearing a black dress and black head scarf and walked briskly toward the school, where she had last seen her son alive.
“I have come here because the other kids are also my kids,” she said. “I will complete the dreams of my son, the dreams I had about my son, by teaching other students. I have chosen to get back to school instead of sitting at home and keep mourning.”