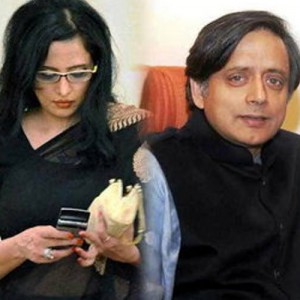 NEW DELHI : The Sunanda Pushkar murder case is getting murkier by the day with reports on Monday claiming that Congress MP Shashi Tharoor allegedly stayed with Pakistani journalist Mehr Tarar in Dubai.
Pushkar was found dead in a five-star hotel in South Delhi on the night of January 17, 2014, a day after her Twitter spat with Tarar over the latter’s alleged affair with Tharoor.
On microblogging website Twitter, Bharatiya Janata Party (BJP) leader Subramanian Swamy took a dig at Tharoor, saying the Congress MP was India’s Union minister at the time when he “allegedly spent three nights with Tarar”.
Swamy was referring to a report on a news channel which suggests that a witness has revealed during the judicial inquest that Tharoor and Tarar stayed together in Dubai for three days.
Meanwhile, Tharoor reached the national capital yesterday and is likely to be questioned by Delhi Police in connection with his wife’s murder.Tharoor arrived at the Indira Gandhi International airport from Kerala at around 2 pm and went to his house in central Delhi’s Lodhi Estate.
Tharoor did not reply to questions from journalists, and merely said: “I have already spoken with the media (in Kerala).”He drove away in a car with his security staff. After reaching home, he consulted his lawyers and discussed the case.Policemen have been deployed outside his residence.
Tharoor was undergoing ayurvedic rejuvenation in Thrissur district of Kerala. Soon after his discharge, he raised questions on the Delhi Police investigation and demanded a professional probe.
He also said he wrote to Delhi Police Commissioner BS Bassi, assuring him full cooperation with the investigating team.
On Saturday, Delhi Police said they will question Tharoor after the people who were in the hotel and in touch with Pushkar before she was found murdered.
Police have compiled a list of people to be questioned in the case. They have already questioned Tharoor’s domestic help Shri Narain Singh, who told them there was a fight between Tharoor and Pushkar, a day before she was found dead.
In November last year, police also questioned Pushkar’s businessman friend Sunil Trakru – who had then dropped Pushkar at the hotel when she came to Delhi in January 2014.
The case was registered on January 01, almost a year after her death, following the final post-mortem report from the All India Institute of Medical Sciences (AIIMS) that was submitted on December 28, last year.
Police had collected pieces of broken glass from Pushkar’s hotel room which purportedly implied that a scuffle took place inside the room before her death.