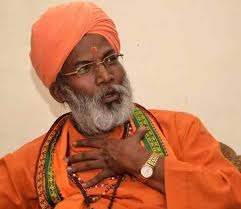 NEW DELHI : BJP lawmaker Sakshi Maharaj on Tuesday denied receiving any show cause notice asking him to explain why action should not be initiated against him for his controversial remarks in the recent past.
Speaking to media, Sakshi Maharaj said, “I have not received any such notice and I have no idea about it.”He further added, “This is our internal matter. What does the media have to do with this? (Ye humaare ghar ka maamla hai, aap media waalon se kya lena dena?).”
According to reports, BJP on Monday had slapped a show cause notice on party’s Unnao MP Sakshi Maharaj.The notice was sent on the direction of BJP president Amit Shah and Sakshi has been asked to respond within 10 days his position on why he continued to make “controversial statements which go against the party line despite having been warned.
Sakshi was at the centre of a controversy when he asked Hindu women to have at least four children, sparking condemnation from the opposition which alleged that the ruling party was trying to polarise the atmosphere.BJP had distanced itself from his remarks and had urged its workers and public representatives to refrain from making such comments.
“We have accepted the slogan ‘Hum do, hamara ek’. Now these traitors are not satisfied. They have given another slogan ‘Hum do aur hamara. They are advocating marriage of a girl to a girl, boy to another boy. This is what the last government did.
“This is why I want to request women to give birth to at least four children. Give one to sadhus and ascetics. Media says there are ceasefire violations happening, so send another to the border,” the saffron-clad MP said at a religious convention in Meerut last week.
Sakshi had earlier stoked a row by describing Mahatma Gandhi’s assassin Nathuram Godse as a “patriot” and was forced to apologise in Parliament. The opposition reacted sharply to Sakshi’s controversial remarks with JD(U) taking a jibe at the Sangh Parivar and asking its leaders to lead by example. They also demanded a clarification from the government. BJP’s national Secretary Shrikant Sharma said the party has asked its public representatives and workers not to make such comments in public.
“The remarks made by Sakshi Maharaj are his personal views and the party has nothing to do with it,” he had said.