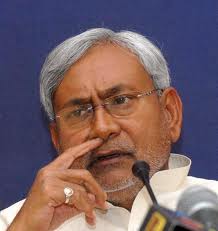 PATNA : Nitish Kumar, the chief minister of Bihar, has lost two of his closest confidantes to the BJP.  Renu Kushwaha – a minister in his cabinet – resigned yesterday after her husband, Vijay Singh, quit the chief minister’s party to join the BJP.
The switching of sides was a public spectacle. Vijay Singh announced his new allegiance to the BJP at a rally in Purnia addressed yesterday by Narendra Modi, the BJP’s prime ministerial candidate. Mr Modi and the Bihar Chief Minister share a long-running feud.
Renu Kushwaha is the second woman to quit Mr Kumar’s government this election season.  Last month, Parveen Amanullah, the lone Muslim woman in the state cabinet, resigned and joined Arvind Kejriwal’s Aam Aadmi Party (AAP).The Kushwahas comprise about 5% of the electorate in Bihar and, in terms of numbers, are second only to the Yadavs among the Other Backward Castes or OBCs. They have traditionally voted in tandem with the Kurmis, the caste to which the chief minister belongs, which is why the BJP has been making a concerted effort to wean away the Kushwahas.
Renu Kushwaha represented Bihariganj in the Madhepura district in the Bihar assembly. There is speculation that now that she may be fielded as the BJP candidate from Madhepura for parliament, where she is likely to be pitted against the JD(U) president Sharad Yadav and former MP Pappu Yadav, who joined the Rashtriya Janata Dal yesterday.
In June last year, Mr Kumar ended a 17-year alliance with the BJP over its decision to place Mr Modi in charge of its national campaign. Mr Kumar cites the 2002 riots in Gujarat to allege Mr Modi of being a divisive leader. The BJP says that Mr Kumar’s stand is for public consumption among his Muslim voters, and points out that when the riots took place, Mr Kumar was a cabinet minister in the BJP-led union government and did not resign or register his protes