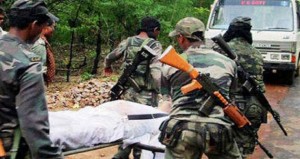 RAIPUR: At least 19 jawans have been feared killed and several others have been injured in an encounter between the Naxals and the security forces in the Dantewada district of Chhattisgarh, sources in the police have said.The Naxals attacked 50 personnel in a joint team of the CRPF and the state police around 10:30 this morning. Firing is still underway.Bodies of five jawans have been recovered so far. Casualties are likely to rise. The attack reportedly happened in Tongpal near Jeeram valley, where many senior Congress leader of the state were killed in a Naxal ambush last year.