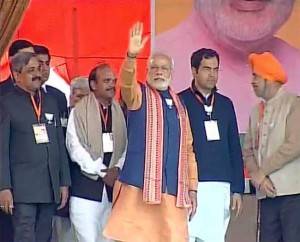 NEW DELHI : “To be in government is a serious responsibility. It is about understudying the pains of the common man. Running away does not help,” he said.
“Delhi needs a responsible government. It needs a government that has people who have worked on the ground. This nation has always been strong. It needs a government due to which we can make a district identity for ourselves,” he said.
“The Congress governments in Haryana and Delhi played their people against each other. This was their culture. We moved towards solving issues,” he said.
Prime Minister Narendra Modi at a rally in Dwarka in Delhi on Sunday.”On one side there are false promises and lies. I don’t think there has ever been so many lies in polls as there are this time,” he said.
“A person from Poorvanchal is the PM. People of Varanasi have voted me to Parliament and blessed me,” Modi said. “I contested election on agenda of development,I govern nation on same agenda, development is the only solution to all our problems.”
“Delhi is mini-India. Delhi is the pride of the nationâ€¦I had said it then also- to develop India we need all-round development. Only one area’s development will not help the entire nation,” he said.
“One side there were unauthorised colonies and on the other side unauthorised promises. We took the decision to authorise them,” he said.
“Every man dreams of giving quality education to his children and having a home of his own. Does the poor have no right to live with respect?” he said.