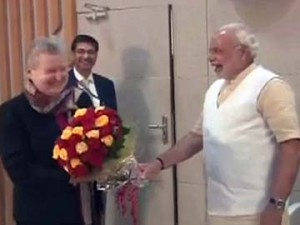 GANDHINAGAR : The US ambassador to India on Thursday met Gujarat Chief Minister Narendra Modi, a signal that Washington is ending the boycott it began in 2002 after communal violence seared  his home state during his first term in office.
Ambassador Nancy Powell met Mr Modi, the BJP’s prime ministerial candidate, in Gujarat’s capital Gandhinagar. Television footage showed her shaking Mr Modi’s hand and smiling, while he gave her a bunch of red and yellow flowers.The footage, released by the Gujarat government, also showed the two sitting in a meeting room at his residence accompanied by officials. There was no immediate word on what was discussed.
It was the highest-profile encounter between US officials and Mr Modi since the State Department revoked his visa in 2005 over the riots in Gujarat  in which more than 1,000 people were killed, most of them Muslims.
A Supreme Court inquiry has declared there is no evidence that Mr Modi was complicit in the violence. Maya Kodnani, who served as one of his ministers from 2007 to 2009, was found guilty of murder for her role in the violence.
Opinion polls are giving the BJP the lead in the national elections, due by May, but forecast that the party will not get a majority. The US said this week that today’s meeting does not indicate a change in US policy “per se” on the issue of Mr Modi’s visa.
“There has been no change in our long-standing visa policy,” she told a regular news briefing in Washington. “When individuals apply for a visa, their applications are reviewed in accordance with US law and policy. This is not a reflection of any change.”
Britain became the first European country to end an informal boycott on meeting  Mr Modi, which had been in place since the riots. Other European countries followed suit last year.