NEW DELHI :  The BJP’s prime ministerial candidate Narendra Modi has taken a swipe at the government over the issue of his edited interview that was telecast on national broadcaster Doordarshan. “I feel very sad to see our National TV channel struggling to maintain its professional freedom,” Mr Modi tweeted on Saturday, using the occasion of Word Press Freedom Day to make his point. 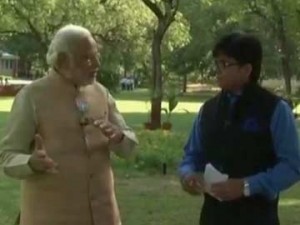 He also posted, “We have witnessed the horrors of Emergency when freedom of press & freedom of expression were suppressed. It is a blot on our democracy”.His comments come as his party has alleged that his interview which aired a week ago was heavily edited on the orders of the government.Mr Modi’s office has released the unedited interview.Fuelling the controversy, the top man at Prasar Bharti, which runs Doordarshan, has said in a letter that the broadcaster must get more autonomy, and referred to the “shadow of government” leading to lack of credibility for the national broadcaster.
The government has denied influencing the edit.Prasar Bharti is meant to be completely autonomous — an act of Parliament trounced it from government control in the 1990s.Among the content omitted from Mr Modi’s interview were his claims of a one-time friendship with Ahmed Patel, the political secretary to Congress chief Sonia Gandhi, and his remarks on Mrs Gandhi’s daughter, Priyanka.
Mr Modi had said he understands her strong defense in the election campaign of her mother and brother, Rahul, who is fronting the party’s bid for a third successive term. Mr Modi is expected to lead the BJP to its strongest performance ever. The Congress is hurtling towards a wipe-out, according to opinion polls.