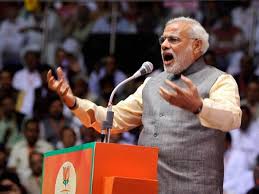 NEW DELHI : Prime Minister Narendra Modi today lauded and thanked the media for its role in his ambitious ‘Swachh Bharat Abhiyan‘ or ‘Clean India’ campaign, saying “You have turned your pen into a broom.”
Addressing a gathering of over 400 journalists in his first formal interaction with the media since coming to power in May, PM Modi said, “I am reading so many articles on Clean India. Electronic and social media is also doing a comprehensive debate on it. This is a service to the nation. This is a good example of how the media can play a constructive role.”
The event, called the ‘Deepawali Milan’, was held at 9, Ashoka Road, adjoining the BJP headquarters and was attended by BJP president Amit Shah, senior cabinet ministers and party leaders.
“Just the PM wielding a jhadoo won’t do, everyone has to,” Mr Modi told the audience, referring to the mega cleanliness drive that he launched on October 2, Mahatma Gandhi’s birth anniversary.In comments that also drew laughs from the audience, the PM fondly recalled his earlier days when he used to help with seating arrangements at media meets and used to interact freely with the press.
“I am looking for ways to strengthen my ties with the media,” Mr Modi said.
After his barely 10-minute-long statement, the PM dived into the crowd, mingling freely with the journalists. Some of them jostled to get ‘selfies’ clicked with him to which Mr Modi happily obliged.
The 64-year-old Prime Minister has made extensive use of campaign speeches, glitzy policy launches and social media to propagate his message – he has 7.3 million followers on Twitter.
But his government has been often been criticised for being unwilling to face challenging questions. Five months after he took power, the Prime Minister’s Office still has no official spokesperson.