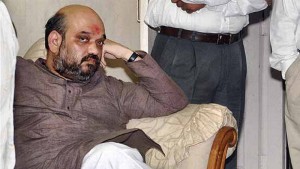 NEW DELHI : In an embarrassment for the BJP, the Narendra Modi government has contradicted party president Amit Shah on his claim that Saradha scam money was used for the Burdwan blast.In a written statement in the Lok Sabha, Dr Jitendra Singh, MoS in PMO, said that the investigations have so far not found any link to suggest that Saradha scam money was routed to Bangladesh.
“So far investigation into Saradha chit fund scam don’t show its money is routed to Bangladesh to fund terror activities,” Singh said.Last week, Amit Shah, while addressing a rally in Kolkata, had said that reports suggests that Saradha money was used for the Burdwan blasts.Expectedly, the TMC has hit out at the BJP and demanded an apology form Amit Shah.
“He is dangabaaz…Amit Shah is a bogus person. He is famous criminal in Gujarat, he speaks lies,” said TMC MP Kalyan Banerjee.Banerjee’s party colleague and fellow MP, Sudip Bandyopadhyay said, “Aamit Shah is an uniformed person, he should have been more cautious. Now he should apologise for the comments.”However, the BJP is staunchly defending the party president. Party spokesperson Siddharth Nath Singh said, “There is no embarrassment (over the issue). Claims (by Shah) were made on the basis of newspaper reports.”
The Left has its own take on the matter. Senior CPI(M) leader and MP Sitaram Yechury said the developments suggests that some deal is going on between the BJP and the TMC.