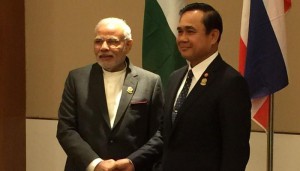 NAY PYI TAW:  Prime Minister Narendra Modi today pitched his “Make in India” dream to his Malaysian counterpart Najib Tun Razak as the two met on the sidelines of the ASEAN-India summit in Myanmar.
“I am giving a lot of emphasis to ‘Make in India’ and want to invite Malaysian companies to come to India. There are a lot of opportunities,” PM Modi said, according to his official website.”Malaysia worked a lot on affordable housing. We want every Indian to have a home by 2022. We have seen your companies can work in this area,” he told the Malaysian premier.
The Malaysian Prime Minister reportedly told PM Modi that he wants Indian companies to look at opportunities in Malaysia. He also invited PM Modi to visit Malaysia.
In a tweet describing the meeting, foreign ministry spokesperson Syed Akbaruddin said, “Reformers meet, share thoughts on govt & economic reforms.”After attending the ASEAN or Association of Southeast Asian Nations and the East Asia Summits, PM Modi will visit Australia and then Fiji. On his website, he has invited people to share “thoughts and ideas” on his Australia trip and shared details of a webpage dedicated to the visit.
In Australia, PM Modi is expected to hold bilateral talks with Prime Minister Tony Abbott in Canberra after the annual summit of the Group of 20 of the world’s biggest developed and emerging economies. The two-day G20 summit will be held in Brisbane from November 15.
Mr Modi is the first Indian Prime Minister to visit Australia after Rajiv Gandhi did in 1986. Mr Abbott will host a reception for Mr Modi at the iconic 161-year-old Melbourne Cricket Ground. In Sydney, the Indian Australian community has planned Madison Square Garden-style reception at the Olympic park.
During his three-nation tour, PM Modi will meet more than 40 leaders, including those from China, Germany, Britain and South Korea.