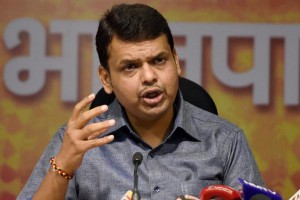 MUMBAI: On a big day in the Maharashtra Assembly, the minority BJP government has crossed a first hurdle, getting the Speaker’s post unchallenged after the Shiv Sena and the Congress withdrew their candidates. Now, Chief Minister Devendra Fadnavis of the BJP must win the floor test for his party to remain in power.
In what is being seen as a game of extreme brinksmanship, the Shiv Sena’s Ramdas Kadam said today, “There have been no new talks last night. We will not vote in favour of the BJP” in the trust vote.
He said the BJP wants the Sena to first give support today and only then is will it discuss portfolios.It is all about numbers. The BJP has 122 legislators along with an ally and claims that it has the support of 13 more, including independents – which adds up to 135, nine short of the 144 it needs to make the halfway mark in the Assembly, which has an effective strength of 287 as one  law-maker died soon after the elections.
If the Shiv Sena does indeed vote against the BJP, Devendra Fadnavis will need to fall back upon the support offered by the Sharad Pawar’s Nationalist Congress Party or NCP. If the NCP’s 41 legislators votes for the BJP today, Mr Fadnavis will sail through with 176.Even if the NCP abstains from voting, the BJP will win.
The effective strength of the House will drop to 246 and the BJP will have to prove the support of only 124 MLAs.After the Mr Kadam said his party would oppose the trust vote, the BJP’s senior leader Eknath Khadse said, “The Shiv Sena is free to take their decisions. We won’t be doing anything wrong if the NCP supported us.”The NCP’s Chhagan Bhujbal reiterated this morning, “We could abstain or vote in favour of the BJP.” He also taunted the Shiv Sena, saying,
“What happened to Uddhav’s dream of becoming the Chief Minister?”In an editorial in its mouthpiece Saamna, the Shiv Sena warned the BJP against accepting the support of the NCP. “Will the BJP save the govt with the help of rodents? The NCP is a party that is known to nibble at the state exchequer,” it said.The BJP and Shiv Sena, former allies, have been in talks for weeks over power-sharing in Maharashtra. Those negotiations went into deep freeze over the portfolios the Sena would get in a BJP-led government.
The Sena wants at least one A-grade ministry like Home or Revenue or the deputy chief minister’s post. The BJP has reportedly said no. Mr Kadam said there have been no talks last night.