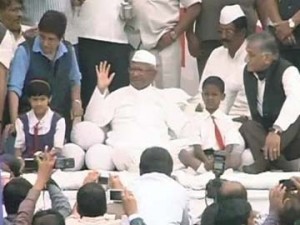 KOLKATA: As West Bengal Chief Minister Mamata Banerjee begins her three-day political Delhi tour this evening to gather up a wider backing for her Federal Front to have a face-to-face meeting with Anna Hazare, she rolled out speculations in all political camps. Incidentally, Hazare who “singled out Banerjee as the fittest prime ministerial candidate’’ recently set off an expectation that the most famous social activist would join her in her campaign to launch a Federal Front. As luck would have it, her expected face-to-face meeting with Hazare coincided with Congress winning over Telengana Bill in Lok Sabha and being pushed to a high spirit once again. Speaking to Newstrack, a senior Trinamool Congress leader said: “Importance of her meeting with Mr Hazare would not be eclipsed by the Congress’ manipulated victory over Telengana Bill in Lok Sabha today, instead her meeting would be a fitting reply to the promoters of many failed political experiments.’’ According to party sources, tomorrow both would have a joint press conference after the meeting where, Anna Hazare is expected to openly back Mamata Banerjee’s idea of Federal Front and “hail Banerjee as the fittest prime ministerial candidate because of her honesty, fight against corruption and simple-living style.’’ However, political observers here feel that Banerjee gets her arms strengthened with Anna Hazare’s backing her up over Federal Front when almost no political parties responded to her call to form a political alternative to Congress, BJP and the CPI(M)-proposed Third Front. Ends