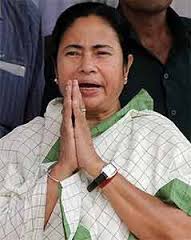 KOLKATA: It was in a little more than mid-`90s, when Jyoti Basu, former Bengal chief minister Jyoti Basu greeted Atal Behari Vajpayee with no greetings and decided to boycott his swearing-in ceremony!

But the gesture wasn’t greeted either by (barring Left leaning) intellectuals even parties small-time Left Front partners, like Forward Bloc and RSP.

Incidentally, though Marxists see a clear hint to Left’s probable burial in once Red stronghold after the poll, with Mamata Banerjee’s silence to Narendra Modi’s invitation to swearing-in ceremony only sets a secret Left agenda revisiting.

“Going there wouldn’t have meant you have become either a convert or signed up a compromise, it would have been just a courtesy to which you must respond with courtesy,’’ said a political commentator.

But ghost of Jyoti Basu seems to have descended on ruling party heads, especially with Mamata Banerjee which many observers see as an effort to cut up Bengal again from Indian political mainstream though Basu knew its advantages, a mix of Congress and Left agenda to keep Bengal cut up from rest of India for state political gains, but what observers feel surprised at have been Mamata’s silence!

A senior state BJP  leader Thathagatha Roy, telling reporters that “it was apparently because we polled 17.2 percent votes which isn’t accepted by state political majors.’’

Also said Rahul Sinha, state BJP  leader, “We have exploded popular political myths here, but we can assure full cooperation with the State Government as per as issues like development in all sphere of Bengal.’’

But Mamata’s revisiting the failed CPI(M) line, may put Bengal in stress. “It wasn’t any political line, though CPI(M) practiced it, but at the cost of Bengal in the name of a failed ideology,’’ said a veteran political commentator.