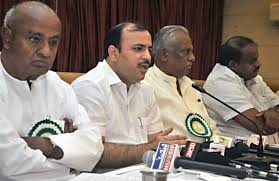 NEW DELHI : Several non-UPA and non-NDA parties are meeting here on Wednesday to discuss the formation of a ‘federal front’ ahead of the Lok Sabha elections due by May this year.
Senior leaders of at least 14 parties are expected to hold talks today over the intricacies of such an alliance, which they are choosing not to call a ‘third front’.
Talks have already been held among Bihar Chief Minister Nitish Kumar, Samajwadi Party chief Mulayam Singh Yadav and JD(S) head HD Deve Gowda.Among other parties expected to attend today’s grand meet include the AIADMK, AGP, BJD, JVM, CPI and CPM.
Part of the agenda at today’s meet is also to join hands to scuttle any populist move which the ruling UPA government could be planning to announce during the Parliament session beginning today.
The February 5 talks will be followed up with another meeting here, either on February 9 or 10. At that meeting, Kumar, JD(U) chief Sharad Yadav, Deve Gowda and other leaders are expected to prepare the blueprint for the front.
“We are keen on trying for a new front on the basis of understanding and cooperation to take on the Congress and the BJP in elections,” Nitish has said, while ruling out a return to the NDA.
“There is no question of us (JD-U) returning to the NDA.”
JD(U) Rajya Sabha MP and spokesperson KC Tyagi had told a leading English daily that the 14 regional parties have already held talks once on October 28 last year.Today’s meeting comes days after Jayalalithaa’s AIADMK forged pre-poll alliances with the CPM and the CPI
.