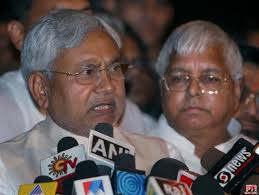 PATNA: Nearly 20 year after they parted ways, Lalu Prasad Yadav and Nitish Kumar, both former chief ministers of Bihar, will share the stage at a political event when they begin their joint campaign for the state by-polls tomorrow.The announcement puts an end to weeks of ‘will they-won’t they’ speculation on whether the two leaders, bitter political rivals till recently, will indeed come together at a public event. In 2005, Mr Kumar, in partnership with the BJP, had ousted Mr Prasad’s party from power.
Nitish Kumar, leader of the Janata Dal – United or JD-U and Lalu Prasad, chief of the Rashtriya Janata Dal or RJD, will address public rallies at Hajipur and Mohadi Nagar.
They will continue their campaign together next week as well.
The RJD, the JD-U and the Congress have put together a seat-sharing formula for the by-elections for ten assembly seats scheduled to be held on August 21. Under the arrangement, Mr Kumar and Lalu’s parties will contest four seats each; the Congress gets the other two.The by-polls are being considered the semi-final event, with the grand finale being the state elections due next year.
The alliance between Mr Kumar and Mr Prasad – who were once prominent young leaders in the Janata Party in the 1970s before forging their own political paths – comes in the wake of the BJP’s sweeping victory in the Lok Sabha polls.Mr Kumar had quit as chief minister in May this year after accepting responsibility for the party’s crushing defeat in the national elections, in which the RJD could win only seven seats. The BJP, which was dumped by Mr Kumar in June last year, won 31 of the state’s 40 seats.
Incidentally, when the three parties formally announced the alliance at a press conference in Patna on July 30, both Mr Kumar and Mr Yadav gave the event a miss.