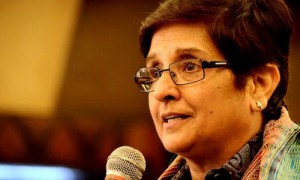 NEW DELHI : It’s not official yet, but former top cop Kiran Bedi virtually signalled her candidature for the post of Delhi Chief Minister, a day after joining politics and the BJP. Ms Bedi shared what she called the six “P” formula to solve the capital’s problems, especially crime.
Ms Bedi, who was given a rousing welcome at the state BJP headquarters at Pandit Pant Marg, addressed a huge gathering of party workers for more than half an hour, outlining her vision for Delhi.
The six “Ps” she said were prisons, prosecution, outreach to people, parents, improving policing, including community policing, and finally, the press. The common point for all of this, she stressed, would be the Chief Minister’s office.
Ms Bedi said that once the BJP comes to power in the capital, she will personally conduct checks in public offices along with government officers, who too will be out on the streets every day at 9 am, before coming to office to ascertain that services are reaching people.
Kiran Bedi was the party office to celebrate unity in the BJP, but several party leaders privately admit they are miffed as “leaders being parachuted at the last minute” into the party.
“Bedi’s speech was more an outline of what her secretariat will look like,” said a senior Delhi BJP leader, who did not wish to be quoted.
But many party workers seemed to have welcomed the former IPS officer into the BJP fold, perhaps aware that the Aam Aadmi Party will put up a tough fight.
The BJP has said so far said that it will not project a presumptive CM and that Prime Minister Narendra Modi will the campaign’s face as he has been in other recent state elections. Till yesterday, several senior BJP leaders like Dr Harsh Vardhan, Jagdish Mukhi and Vijay Goel were being looked at as probable candidates for Chief Minister.
Delhi votes on February 7 and votes will be counted on February 10.