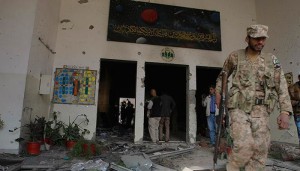 PESHAWAR: A senior Taliban commander, believed to be a key planner in the Peshawar school massacre, has been killed by the security forces in Pakistan’s troubled Khyber Agency.”Saddam had been killed in the Gundi area of Jamrud by the security forces in an operation yesterday. One of his accomplices has been captured alive,” Peshawar Political Agent of Khyber Agency Shahab Ali Shah told reporters.
A member of the Tariq Gedar group of Tehreek-i-Taliban Pakistan (TTP), Saddam had facilitated the seven attackers who had attacked the Army Public School in Peshawar on December 16 and killed 150 people, mostly children.Saddam was also planner of killing of 11 security personnel and eight scouts in Khyber Pakhtunkhwa last year.