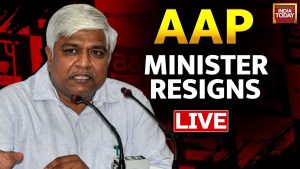 NEW DELHI : Aam Aadmi Party leader Rajendra Pal Gautam resigned from the Delhi cabinet on Sunday after his presence at a religious conversion event sparked a row. Rajendra Pal Gautam tweeted, “Today is the manifestation day of Maharishi Valmiki ji, and on the other hand, it is also the death anniversary of Manyavar Kanshi Ram Saheb. In such a coincidence, today I have been freed from many shackles and today I have been born again. Now I will continue to fight for rights and atrocities on society more firmly without any restrictions.”
Gautam was facing flak over his presence at a religious conversion event where Hindu deities were allegedly denounced. The Delhi social welfare minister had found himself in the middle of a controversy on Friday after a video went viral, showing him attending the event on October 5 when hundreds took a pledge to convert to Buddhism and not consider Hindu deities as gods.
Following the incident, the BJP had launched an attack on Chief Minister Arvind Kejriwal, asking him to sack Rajendra Pal Gautam. BJP national spokesperson Gaurav Bhatia had accused the AAP of hurting the sentiments of Hindus. “Gautam’s comments highlight the hate the party has for the community,” he had said, adding the “comments were made at the behest of Kejriwal”.
Taking the 22 vows of social reformer B R Ambedkar, the crowd at the event had affirmed that they would not pray to Hindu gods or goddesses. The event had come under fire from the BJP, which said Kejriwal and his party “hated” Hindus. At the time, Gautam had said that he had the right to practice his religion as guaranteed under the Constitution. Later, slamming the BJP’s move as propaganda, he had apologised to the people who were hurt by it.
In his resignation, Gautam wrote: “I had joined the programme at Ambedkar Bhawan on October 5 in my personal capacity. It had nothing to do with the AAP or my being a minister. Babasaheb’s 22 vows were also printed in the 17th volume of Ambedkar: Writings and Speeches by former BJP minister Thawar Chand Gehlot. These are repeated across the country… BJP is using these for dirty politics and I am resigning from my post as a minister because of that.” The BJP had demanded Gautam’s resignation after the video emerged. The AAP and the Delhi government had not reacted to the event or the BJP’s demands, but party sources had said that Kejriwal was “angry” with Gautam.
Sharing his resignation on twitter, Mr. Gautam said that after he participated at the event, he had noticed that the BJP had been targeting Mr. Kejriwal and the AAP over his participation which saddened him. “I will continue to work for the party to strengthen India and will follow the teachings of Babasaheb Ambedkar all my life.
The BJP has a problem with me following the teaching of Babasaheb Ambedkar and is using this to play dirty politics… I do not wish that due to me my leader Mr. Kejriwal and my party are harmed in anyway,” Mr. Gautam said in his resignation letter.