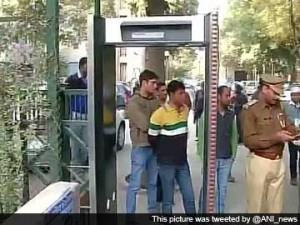 Gaziabad: As a large number of people today gathered outside Chief Minister Arvind Kejriwal’s house in Kaushambi, Delhi and Uttar Pradesh Police had to make special arrangements to manage the influx of visitors.
While the UP Police are managing the traffic and crowd influx outside the premises, a team of Delhi Police in plain clothes are stationed inside the housing society in Ghaziabad where Mr Kejriwal holds the Janata Darbar, a senior UP police official said. The UP Police have installed a doorframe metal detector at the main gate of the society.
“Hundreds of people are coming to meet the Chief Minister and when he comes out to meet them, it becomes chaotic. It is difficult to manage the crowd. In order to prevent the situation from going out of hand, Delhi Police will be taking care of the crowd at his residence and we will manage the traffic and crowd outside,” Public Relations Officer of SSP Ghaziabad, S P Singh, said.Soon after becoming the Chief Minister, Mr Kejriwal has been holding a Janata Darbar every morning to listen to grievances of the people.
Meanwhile, senior AAP leader Sanjay Singh said that they have not demanded a security cover for the Chief Minister, “We have just asked them to manage the crowd.”