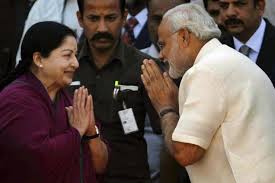 NEW DELHI : : J Jayalalithaa, Tamil Nadu chief minister, will meet Prime Minister Narendra Modi in Delhi on June 3, Tuesday next, amid the buzz that she is in talks with the ruling BJP to join the government at the Centre. Sources said BJP leaders have been in touch with Ms Jayalalithaa and her AIADMK, which swept Tamil Nadu in the general elections, winning 37 of the state’s 39 Lok Sabha seats.
That makes Ms Jayalalithaa’s party the third largest in Parliament, very close to the main opposition party the Congress, which has 44 MPs.
The BJP has a majority on its own in the Lok Sabha with 282 seats and is very comfortable placed at 336 along with its pre-election partners in the National Democratic Alliance or NDA.But it needs to bolster its numbers in the upper house or the Rajya Sabha to be able to smoothly push through legislation.
Ms Jayalalithaa is said to share a good rapport with Mr Modi and was seen in the run-up to the general elections as a natural ally would the BJP have needed support to form government. During the campaign, both leaders had criticised each other as they addressed their voters.
Both emerged big winners on May 16 when votes were counted – Mr Modi registering a massive win nationally and Ms Jayalalithaa sweeping her state. They had then exchanged greetings and Mr Modi had assured the state of the Centre’s support.
There have been some blips since, with Ms Jayalalithaa sacking a party leader for suggesting that the AIADMK would like “close ties” with the BJP. “Narendra Modi is great friend of Jayalalithaa, they may differ politically. If he becomes PM then Madam would like close ties,” former AIADMK leader K Malaisamy had said. The chief minister had described it as “bringing disrepute to the party”.
She also did not attend Mr Modi’s oath ceremony on Monday in protest against the presence of Sri Lankan president Mahinda Rajpakse, whom most political parties in Tamil Nadu accuse of human rights violation in his country.