BANGALORE: Infosys on Tuesday reported better-than-expected margins and profits for the March quarter, though sales were flat. India’s second largest outsourcer said its dollar revenues are likely to grow at 7-9 per cent in the current fiscal, sending its shares higher by as much as 4.2 per cent. Infosys reported a consolidated net profit of Rs. 2,992 crore on sales of Rs. 12,875 crore between January and March 2014. That compares with NDTV estimates of Rs. 2,846 crore profit on sales of Rs. 12,973 crore. 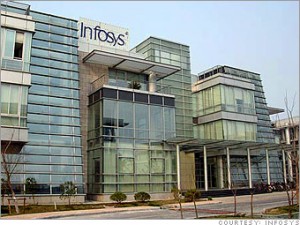 In US dollar terms, Infosys reported consolidated sales of $2,092 million in Q4 versus expectations of $2,102 million. In the December quarter, it reported $2100 million in dollar revenues.
CEO and Managing Director S. D. Shibulal said, “I am pleased that we have been able to double our growth rate for the full year compared to last year, though performance in the last quarter of FY 14 has been disappointing.” Infosys said its attrition rate jumped to 18.7 per cent in Q4 vs 18.1 per cent in the third quarter. It declared final dividend of Rs. 43/share for FY14.
Analysts were cautious ahead of Infosys’ earnings announcement as the management had warned of muted growth on account of reduced spending by high tech enterprises and retail customers last month.
That warning has come true as far as sales are concerned, but margins expanded by 50 basis point, sending Infosys shares higher in a volatile market. Infosys’ operating margins rose to 25.5 per cent in the March quarter as against 25.1 per cent in the December quarter despite a strengthening of the rupee against the dollar. Infosys has been working on a new strategy to cut costs and increase efficiency to improve margins and that strategy is paying off, analysts said.
Tirthankar Patnaik of Religare told  that the Street with be happy as far as the guidance for FY15 is concerned.
“We think we continue to like Infosys. The management had warned of some disappointment, but that is not happening and the numbers are in line,” he said.Though Infosys sales outlook met analyst expectations, the company is likely to grow significantly slower than industry average. Even at the higher end of 9 per cent, its growth for 2014-15 fiscal will be lower than 11.5 per cent growth clocked in the previous fiscal ending March 2014.
For the full year 2013-14, Infosys revenues were Rs. 50,133 crore for the year ended March 31, 2014, a growth of 24.2 per cent from the previous year. This is the first time the IT major crossed the Rs. 50,000 crore in full-year revenue
For the full year, the net profit grew 13 per cent to Rs. 10,648 crore for the year ended March 31, 2014.Infosys CFO Rajiv Bansal told , Profit that it may see a 300 bps dip in margins in the first quarter on visa costs and wage hikes. He said Infosys had offered a 6-7 per cent wage hike for offshore employees.