LUCKNOW: Attempting to reach out to Muslims, BJP president Rajnath Singh met some prominent Muslim religious leaders like Maulana Kalbe Sadiq, Maulana Kahild Rasheed and Maulana Kalbe Jawad in Lucknow.I feel that if India has to become a strong nation then all the castes, religions and their followers have to be assimilated and this is what the BJP believes in. Since I am the party president and a candidate from Lucknow, I have decided that I will go and express my respect to all religious leaders,” Mr Singh said after the meeting.Mr Singh also tweeted his picture along with the clerics. 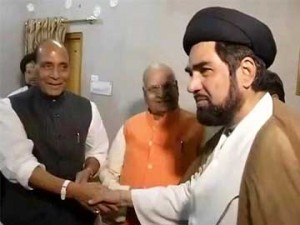 The BJP chief has been seeking the support of the Muslim community which comprises a major chunk of voters in Uttar Pradesh.The meeting comes a few days after Congress president Sonia Gandhi met Syed Ahmed Bukhari, the Shahi Imam of one of India’s most prominent mosques, the Jama Masjid. She reportedly asked the group to ensure that the Muslim vote in India is not divided.After the meeting, the BJP’s prime ministerial candidate Narendra Modi accused Mrs Gandhi of indulging in “open communalism” by seeking votes on the basis of religion.
Last week, the clerics asked for a boycott of both Congress and the BJP in the Lok Sabha election and urged Muslims to vote for secular candidates. Accusing Congress of treating Muslims as “servants”, Maulana Jawwad, a noted Shia scholar, and Yahya Bukhari, brother of Shahi Imam of Delhi’s Jama Masjid, said, “We appeal to Muslims to vote for secular candidates and boycott Congress.”