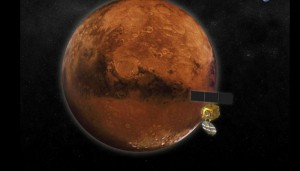 CHENNAI: India’s Mars Orbiter spacecraft has started sending its first set of pictures of the Red Planet’s surface late on Wednesday night, confirmed ISRO.“We have received five pictures and these are under processing,” said a top official of Indian space agency on Wednesday.
The spacecraft has sent back high quality images of Mars hours after it successfully entered the Red Planet’s orbit on Wednesday.India created space history on Wednesday by becoming the first Asian country to reach Mars and the first in the world to place a spacecraft in the Red Planet’s orbit in the maiden attempt.
The country joined the elite club of Martian explorers – United States, European Space Agency and the former Soviet Union with the Mars Orbiter Mission, lovingly called Mangalyaan.