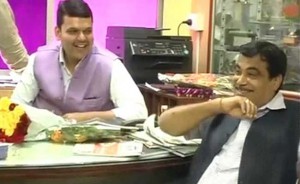 NAGPUR: In Nagpur, which is expected to give Maharashtra its next chief minister, state BJP chief Devendra Fadnavis today visited Union minister Nitin Gadkari to wish him a happy Diwali.
Soon after the visit Mr Gadkari said, “I am happy in Delhi.” The senior minister had been asked by reporters if he intended to  return to state politics in Maharashtra.

Two days ago, Mr Gadkari’s loyalists – about 40 legislators – sent word to the BJP leadership that they would like the minister to be appointed chief minister of Maharashtra, where the party posted its strongest performance ever in state elections held last week. One newly-elected legislator has even offered to resign to facilitate Mr Gadkari’s election as a legislator so that he can be chief minister.
44-year-old Devendra Fadnavis, say party sources, remains the front-runner to become the BJP’s first chief minister in Maharashtra. Sources described his half-hour meeting with Mr Gadkari this morning as a “courtesy call.”
He was accompanied by the mayor of Nagpur. Mr Fadnavis is said to visit the more senior Mr Gadkari every year on Diwali and did not break with the tradition this year.Mr Gadkari, who addressed 104 public rallies while campaigning for the BJP in the assembly elections, had earlier too emphatically stated that he was not in the race for chief minister.
This week, however, in somewhat mixed signals, he said it was for the party’s central leadership to decide and that he would accept any
responsibility given to him.The move by his supporters is also seen as a bit of political muscle flexing to re-assert Mr Gadkari’s position as the top leader in the region.
Not only do Mr Gadkari and Mr Fadnavis, both Brahmin leaders, belong to Nagpur, but both are also said to enjoy the support of the RSS, the BJP’s ideological mentor. The RSS is headquartered in Nagpur.
The BJP is the single largest party in Maharashtra, but is short of a majority and needs an ally to help it cover the deficit to form government. It is currently weighing its options and has said that it will take a decision only after Diwali. This has also delayed an announcement on who will be chief minister.
Leader of Opposition in the state Legislative Council, Vinod Tawde said yesterday that “there is no race and no competition” for the top post.