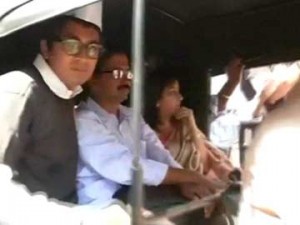 MUMBAI: Arvind Kejriwal, who landed in Mumbai this morning, caught an autorickshaw from the airport to travel the 5-km distance to the Andheri station in the western suburbs of Mumbai.  His roadshow passed through the constituency of AAP candidate Mayank Gandhi, who is pitted against sitting Congress MP Gurudas Kamath. Mr Gandhi traveled in the auto with Mr Kejriwal.
At Andheri the 45-year-old Mr Kejriwal will hop on to the over-crowded “lifeline of Mumbai” and reach Churchgate station in south Mumbai where a private fund-raising meeting will be held. Following this he will embark on another road show traveling through the Mumbai South and Mumbai North East constituencies from where former banker Meera Sanyal and activist Medha Patkar will respectively contest.
As he crisscrosses the city on public transport, the Mumbai Police is providing Mr Kejriwal with Z category security, which includes cover by police personnel and anescort car. AAP sources say Mr Kejriwal is determined to reject that offer, but the city police is equally determined to provide adequate protection.
On a road show in Gujarat last week, Mr Kejriwal’s car was attacked and its windshield was broken by protestors who, the AAP alleged were BJP workers.
Mumbai, AAP sources say, is critical to the party as it’s from the Maximum City where huge funds are expected. Also after Delhi, AAP hopes to make an impact in the urban centers around Mumbai in not just the Lok Sabha elections, but also the assembly elections scheduled to take place later this year.
But like in Gujarat, political fireworks are expected at his next destination: Nagpur in Vidarbha. Nagpur, where the RSS is headquartered, is where former BJP president and senior leader Nitin Gadkari is to make his Lok Sabha elections debut, as is AAP candidate Anjali Damania. Mr Gadkari is expected to win.
Mr Kejriwal is also scheduled to hold a fund-raising dinner at a luxury hotel in Nagpur at a price of Rs. 10,000 per person on March 13.