LUCKNOW: In a first in the last one decade, Congress vice president Rahul Gandhi on  Wednesday reached his parliamentary constituency Amethi during voting Gandhi’s visit comes as the going seemed to be getting tough for the incumbent MP, more so after the BJP’s prime ministerial candidate Narendra Modi visited the family bastion and urged the people to shun dynastic politics and vote for development instead. 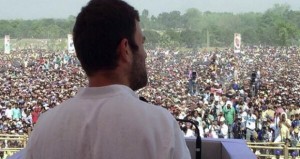 Gandhi reached the Fursatganj airstrip early morning and then went to be with his supporters.  He drove past many polling booths and personally saw to it that voters were having no difficulty in casting their votes.He reluctantly interacted with reporters and told them that he had always been working to strengthen democracy in the country. Asked to respond on the ‘neech rajniti’ barb of his sister, Priyanka Vadra against BJP’s Narendra Modi, the Gandhi scion said no one was low by caste, but it was the thinking, politics and actions which were low and despicable.
“Neechi jaati nahin hoti, soch aur rajniti hoti hai,” he added. Smriti Irani, BJP’s candidate from Amethi, criticised Rahul Gandhi’s comment and pointed out that for BJP low thinking politics’ was “usurping flats meant for widows of Kargil martyrs, treating Pakistani prime minister on Biryani after the Pakistan Army beheaded two Indian soldiers and to allow millions of tonnes of foodgrain to rot in godowns rather than distributing it to the needy and poor”.
Kumar Vishwas, who is the Aam Aadmi Party (AAP) candidate from Amethi, said that he was confident that people had decided to favour the broom (AAP’s party symbol) and would defeat Rahul Gandhi.  He also slammed Narendra Modi, by saying that coming in a chopper and waving hands from the dias will not win his party votes.