NEW DELHI : A day after the central government appeared to give up efforts to name a judge to undertake Snoopgate probe, the alleged victim and her father Tuesday moved the Supreme Court to stall any attempt to set up the probe panel.A bench of Justice Ranjana Prakash Desai and Justice N.V. Ramana issued notices to the central and the Gujarat governments following a mentioning by senior counsel Ranjit Kumar seeking the stay of any such move by either the central and the state government. 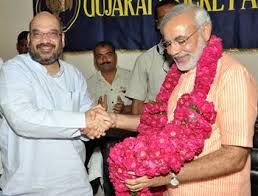 However, the court declined to pass any order saying that it could not pass an interim order without hearing the central and Gujarat governments. The court directed the listing of the matter on Friday.The media has been restrained from making public the woman’s name.Seeking to stall any inquiry commission from undertaking probe into Snoopgate, the woman – an architect – and her father have invoked their fundamental right to privacy and live with dignity as grounds for calling a halt to any move to investigate the surveillance of the woman by the Gujarat Police on the alleged instruction of higher ups.
The entire matter came to light following an expose by two news portals of the alleged telephonic conversations between now BJP national general secretary Amit Shah, who was then state home minister, and two top state police officials about surveillance on the woman in 2009.Gujarat cadre IAS officer Pradeep Sharma’s plea seeking CBI probe into the disclosure by two portals too has been slammed by the petitioners.
Saying that the woman was satisfied with the steps taken by the Gujarat government for her safety, Ranjit Kumar said that there was a sinister campaign to target the reputation of his client and that of her family.“Such sinister campaign by vested groups under the guise protecting the privacy of petitioners has resulted into tarnished reputation and is infringing upon the petitioners and their family members right to privacy, causing them immense anguish and suffering,” the petition said.
The petition said that because of this sinister and malicious campaign, they had to change their residence several times, their e-mail accounts were hacked and they suffered indecent calls.
“The constitution of commission by the state government is wholly unwarranted and unjustified. The attempt being made by the central government to constitute a similar commission which would necessarily infringe upon and encroach upon right to privacy of the petitioners and their family which would clearly be unwarranted and unjustified and would be violative of the fundamental rights of the petitioners and their family members as guaranteed under article 21 of the constitution,” the petition said.