MIRZAPUR: Mirzapur, an Uttar Pradesh town known for its carpets, is trending on Twitter. An election speech here by Congress vice president Rahul Gandhi this afternoon put it on the list of top 10 trending words in India. Along with “American President.””I want to see a day when the American president is asked the time and he will look at his watch and see ‘Made in Mirzapur’ written on it. He will then ask, ‘Where is this Mirzapur’?” said Mr Gandhi. 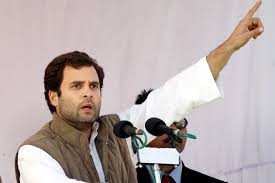 He said most goods, like watches, had “Made in China” inscribed on them. “I not only want a Made in India tag, I want that camera, shoes, t-shirt, watch, to say Made in Mirzapur, Made in Gonda, Made in Saharanpur, Made in Lucknow and Made in Varanasi. But this won’t happen because you are divided,” alleging that the youth of the state fall prey to the politics of caste and religion.
Mr Gandhi mentioned the “American President” also when he quoted him as saying that he was afraid of China and its youth and India and its youth for their industry. “The American President understands your strength. Your own country’s politicians don’t. They use you for votes, then forget about you,” Mr Gandhi said, pitching his party as the one that will address the needs of the young. His statements sparked an amused debate on Twitter. Mr Gandhi, meanwhile, hopped over to Jaunpur, about 100 km away, and said the same thing all over again. This time “Made in Jaunpur.”