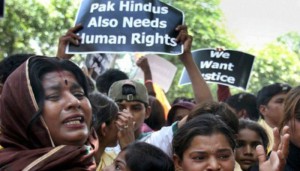 ISLAMABAD: The Hindu minority community in Pakistan is all set to get a marriage law.A parliamentary panel in Pakistan’s has unanimously approved the Hindu Marriage Bill, reportedly after decades of delay and inaction.
The National Assembly Standing Committee on Law and Justice on Monday passed the final draft of Hindu Marriage Bill 2015, where five Hindu lawmakers were specially invited.Mission Ram Mandir: RSS to train 250 to spread the ‘Ayodhya message’

Mission Ram Mandir: RSS to train 250 to spread the ‘Ayodhya message’The committee adopted the bill unanimously after making two amendments to fix the minimum age of the marrying male and female at 18 and making the law applicable to the whole country.

As per reports, the Hindu Marriage Bill 2015 will now be tabled in the National Assembly where it has fair chances of being passed as the ruling Pakistan Muslim League-Nawaz (PML-N) party is supporting it.
After the 18th Amendment, issues relating to religious minorities and their family matters became provincial subjects in Pakistan.