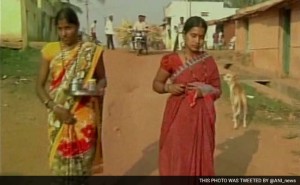 DHARWAD(Karnataka):  “It is a rebirth for all of us,” said Mahadevi, wife of Lance Naik Hanumanthappa Koppad, with a sense of relief as the family reacted to the news of his miraculous survival after remaining buried under snow for six days at Siachen Glacier.
“My husband’s grandmother inspired him in his life. Her prayers saved him from certain death in Siachen. It is a rebirth for all of us,” Ms Mahadevi, residing at Betadur village in Kundagol taluk of Dharwad district, said.
Mr Koppad, who hails from Karnataka, was found alive yesterday after being buried under 25 feet of snow for six days following an avalanche that had hit his post at an altitude of 19,600 feet where the temperature was minus 45 degrees Celsius.
“We were going through a painful ordeal after the avalanche struck…The news of his survival brought smiles back on our faces. We were all crying, and almost lost hope. I didn’t know what to do – I have one-and-half-year old girl child,” Ms Mahadevi said.

Eshwar, Mr Koppad’s cousin, praised Prime Minister Narendra Modi for visiting the soldier who is on a ventilator at the Army’s Research and Referral Hospital in New Delhi.”What should I say about the gesture Modi has shown to a simple soldier. It is heartening that a person who is Prime Minister of India visited him,” he said.
Mr Eshwar also appreciated the concern shown by Army officials who had visited the family members and gave hope of his survival.”The army officials had visited us and instilled hope by saying ‘don’t worry, nothing will happen. The Army had said will find him out and retrieve him alive from the glacier,” he said.

The family of six members left for Goa from where they would take a flight to Delhi in the evening to be with Mr Koppad who is critical, Mr Eshwar said.He said the entire Betadur village greeted the news of survival of Mr Koppad with a sense of relief.
“Some of them were offering prayers in temples for Hanumathappa’s survival. They were happy when they realized their prayers have been heard by the Almighty,” he said.

Meanwhile, noted Karnataka-based industrialist and lawmaker Rajiv Chandrasekhar announced he would take care of the travel and accommodation of Mr Koppad’s family in New Delhi.
“My heartfelt prayers for a speedy recovery and support to his family at this hour. I salute the soldier and hope he recovers soon,” he said.
Mr Chandrashekar also joined the nation in grieving the death of other nine soldiers in the natural disaster.”Our soldiers of the Indian Armed forces guard the nation at Siachen – the world’s highest battleground 24 x7 braving not only enemy hostility but also the harsh and inhospitable weather,” he added.